View from Teheran at night from the Milad Tower

I did not enjoy Teheran on my first visit back in April 2014: too big, too congested, too polluted, too noisy, too hectic… So my expectations were low and I planed to only stay there one day en route from Tabriz to Mashhad. But surprisingly, I quite appreciated Teheran on the second trip in September 2017, and decided to stay longer to discover more in depth this tentacular & chaotic megacity.

Beware nonetheless that you might have a challenging time in Teheran, especially with the maddening congestion and the brutal traffic that turns crossing a street into an adrenaline-pumping adventure! Air pollution and traffic are some of the worst I have experienced so far, so my most sensible advice is to upgrade your standards if possible, and pick a pleasant, if costly, hotel in the northern suburbs of the city, where it is much more relaxed and less polluted. Avoid as much as you can the cheaper but so congested city center!

The good news is that the subway is well developed, and extremely efficient, zipping you through the city in no time… And avoiding the maddening traffic jams.

There is actually a lot to do and see in Teheran, and you can easily spend 3 or 4 days there, and maybe even more…

For me, of all the great museums, the Treasury of National Jewels certainly is clearly Number 1. I wandered through the semi-dark rooms with my mouth wide open. The beauty of the stones and jewelry was captivating: crowns, thrones, globes – all studded with huge gems, giant pearls, others so small it was hard to imagine how they could be fitted on a string.

These treasures draw such a crowd that visitors are only allowed in en bloc. The limited opening hours (02:00 to 05:00 pm from Saturday to Wednesday) do not help and all tour operators adjust their itinerary to that schedule. A guide told me that 700 tourists are taken through the small place on those days, during high season. The museum – actually it is inside a bank – tries its best to handle the masses.

The Golestan Palace, or “Palace of flowers”, is definitely one oft the „must-see“ in Iran, a true masterpiece of the Qajar Era, and since 2013 a UNESCO World Heritage – Deservedly! The glories and excesses of the Qajar rulers are played out across this complex of grand buildings decorated with beautifully painted tiles all arranged around a large garden.

At the entrance you have to choose which building you want to visit and the price for the ticket depends on the number you visit.

Sa’d Abad Museum Complex, in the north of Teheran, located in a 104 hectare park, was once the royal summer home. The inside of the palaces leaves you speechless: exquisite furniture and carpets of a size I never thought was possible. There could not be a better example of the luxurious life style of late Shah’s family. Walking around the wooded park is pleasant and like always a great chance to talk to Iranian families.

This must visit museum is no Louvre, but it is chock-full of Iran’s rich pre-Islamic history. The collection, with artifacts as old as 8.000 years, includes ceramics, pottery, stone figures and carvings, mostly taken from excavations at Persepolis, Ismail Abad (near Qazvin), Shush, Rey and Turang Tappeh.

Unfortunately, the presentation of these treasures is less than inspired, and the lack of useful explanations underwhelming. Moreover, the museum is crowed with large, loud groups and it is at times difficult to find some serenity and enjoy the place…

The combined ticket convinced me to visit both, and at least in this one, I could enjoy the museum in compete quietness… Well, I was actually the only visitor there! A welcome change after the chaotic National Museum of Iran.

Teheran Grand Bazaar is no less than the largest bazaar in the world! And while the bazaars in other Iranian cities (for instance Esfahan or Shiraz) are very touristy, well adorned and exotic, with beautiful decorative artifacts, the Grand Bazaar is more down to earth. This is a true local market, where locals trade about anything one can need… or not: food, clothes, gold, you name it!

Be ready to get lost: Tehran’s Grand Bazaar consists of more than 10 kilometers of labyrinthine alleys, with more than 200.000 (!) vendors and supposedly around 2 million visitors each day… Hence, keeping any sense of orientation quickly turns into a major challenge… But don’t worry, this is Iran: you will always find a helpful local to help you find your way or even to walk you to the next exit.

The Former American Embassy in Teheran

The former US Embassy was the focal point during the revolution in 1979, when it was stormed by students who then held 52 American diplomats hostage for 444 days.

Now it has been opened to the public and is known as the “US Den of Espionage” or the “Museum Garden of Anti-Arrogance”… This place offers a fascinating collection of colorful anti-Western propaganda! 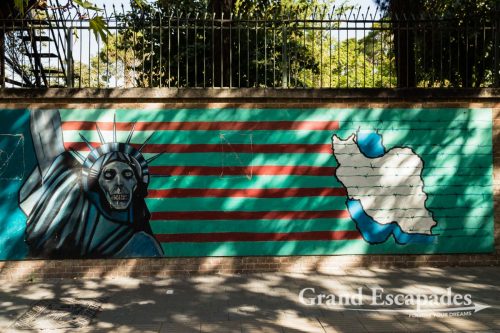 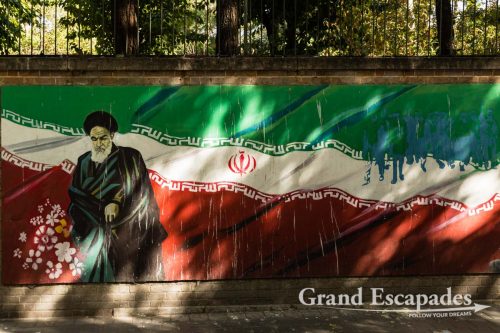 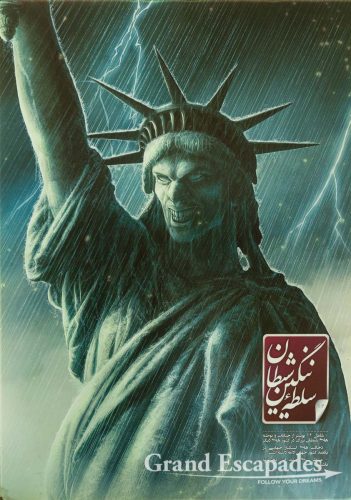 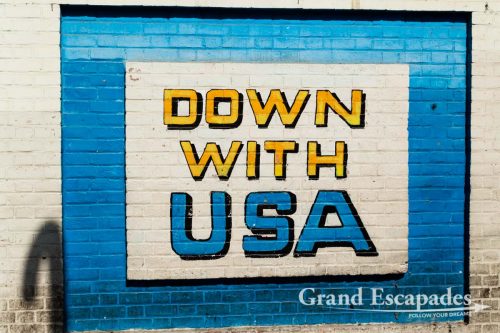 I first hesitated to go and visit this museum dedicated to the Iran-Iraq war, a bloody eight-year conflict that claimed a million lives. This deeply scarring episode in modern Iranian history remains omnipresent in Iran, so I decided to give it a try…

This is a very moving, if surreal, approach of this conflict, like the glittering vision of heavenly paradise many teenaged soldiers were made to believe they would reach through their death as a “martyr” for Iran. Each of the 7 chambers of the museum illustrates a different aspect of this bloody conflict: the events that triggered the war; the besieged town of Khorramshahr before, during and after the conflict; …

But more interesting is the way the war and the “martyrs” were actually used to strengthen the revolution and the current regime, and the fact that war and martyrdom are heavily glorified… And interesting insight in a political system that sees human life as a (geo)-political instrument…

This futuristic, sculptural, multilevel pedestrian bridge linking two large parks has turned into one of the icons of modern Teheran, and is a perfect place to come and relax in the evening from the maddening congestion of the city, strolling through the park with Iranians families, as the sun sets and the bridge gets illuminated.

Khoone Restaurant, near the end of the bridge, is a great place to sample some exquisite Iranian cuisine in a very quiet ,and pleasant setting, but beware that it is pricey…

From the last subway stop at Tajrish Square it is short cab ride to the Tochal Telecabin, which brings you to the fourth highest ski field in the world! The cabins are tiny, but were obviously designed for 6 persons. The ticket up to Station 5 is not cheap, though. And only skiers are allowed to go even further up… The cabin are rusty and god knows how old. Painstakingly slow the lift hobbled up the mountain. Sometimes I swayed over deep valleys, sometimes I was so close to the hikers below that you could hear them talk.

At the top is a huge hut, which has a faint resemblance of huts in the European Alps. Inside hikers had gathered, eating their meals they had carried, all well equipped. Some even had brought little burners to make tea.

Do not wait the end of the afternoon to go down, as this is what every visitor and all skiers do… Waiting time then climbs to 1.5 to 2 hours… While queuing, I saw lots of young women skier and snowboarders enjoying the day on the mountain with their male friends. During Khomeini’s time, men and women had to ski on different slopes, which was controlled by Pasterans on skis. All these restriction are history now…

The tower itself is stunning, the shops, the architecture inside and the artists displaying their work. But most breathtaking is the view of Teheran from the outdoor platform. As far as you could see was a maze of lights and roads cutting through this city of 15 millions. Awesome!

View from Teheran at night from the Milad Tower