By Gilles Barbier on 17. December 2019 in Travel Budget 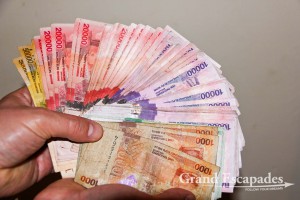 The most frequently asked question about my travels, no matter if it is a single short trip or one of my Round The World Travels, is “How much does / did it cost?” and eventually “How can you afford it?” but basically, both questioned are linked in my opinion…

1. Breakdown of the expenditures per country including transport but not international flights (in € per person):

2. Analysis of our budget during our Round The World Trip in 2007 – 2008 and the main drivers of costs & the possibilities of cost reduction

On our Round The World Trip, we spent in total 20.700 Euros per person for an entire year. That’s a lot more than most people spend. People we met usually had a budget between 12.000 to 15.000 Euros per person. Once we talked to a couple that lived on 10.000 Euros for 2 years, between the two of them! On the other hand we met people who burned 45.000 Euros per person in 15 months. Obviously the sky is the limit…

Most important, these numbers only make sense when seen in a context, what makes traveling cheap, what makes it expensive.

Key elements that really had an impact on our budget traveling for 12 months:

In short, we spent half of the budget in the Pacific, although we spent only one fifth of the time there. South America can even prove more complex. In Argentina and in Chile we spent almost twice as much per day as in Bolivia or Peru.

So, how much did we spend on what?

You may wonder how to reduce costs if you do not have 20.000 Euros available for the trip. We would say that one third of those costs can be cut without major inconveniences if you consider the “Golden Rules” we identified at the beginning: