The Ashura falls on the 10th day of the month of Muharram, the 1st month of the Islamic calendar. It is marked by Sunni Muslims with a voluntary day of fasting which commemorates the day Noah left the Ark, and the day when God opened the Red Sea for the Jews fleeing from Pharaoh.

For Shia Muslims, Ashura is a solemn day of mourning the martyrdom of Hussein ibn Ali, grandson of Muhammad and 8th Prophet of Shia Islam, in 680 AD at Karbala in modern-day Iraq. It is marked with mourning rituals and passion plays re-enacting the martyrdom. People dress in black and parade through the streets slapping their chests and chanting. Some Shia men seek to emulate the suffering of Hussein by flagellating themselves with chains. A fatwa now forbids this in Iran, though.

My trip to Iran in September 2017 was decided on very short notice. So I had no idea what would be going on, or actually that I would happen to be in Iran on the holiest day for Shia Muslims…

If you happen to travel through Iran during the Ashura, beware that it will have a major impact on your visit: during the first 10 days of Muharram, the activity slows, and during the 3 days of Ashura (8th, and especially 9th & 10th day of Muharram), the country COMPLETELY stops. Simply EVERYTHING is closed: of course shops, bazaars, museums, points of interests, but also bus & train stations, airports… EVERYTHING! Consider also that mosques will be used for prayers, and that your access to them (even the most iconic ones, like in Esfahan) will be limited.

Waiting for the Ashura Parade, Esfahan

What a better place to be for the beginning of the month of Muharram, then in the Holy Shrine of Imam Reza in Mashhad, the holiest place in Iran? The crowds attending the Friday Prayer was especially thick, everybody dressed in black. Quite an impressive sight!

Muharram in the Bazaar / Kashan

Most alleys of the Bazaar in Kashan were decorated with back flags, and activity was quite limited, with some shops closed. You could tell that it wasn’t a typical moment in the life of this normally very lively, even buzzy place. At various hours of the day, each time at a different spot in the Bazaar, people would gather, and pray together, recalling the martyrdom of Hussein. Emotions are high, and crying not uncommon.

At one of those gatherings, I was invited by local shopkeepers to join them, being offered tea, food, and the possibility to take pictures of the ceremony. A very intense, moving moment! 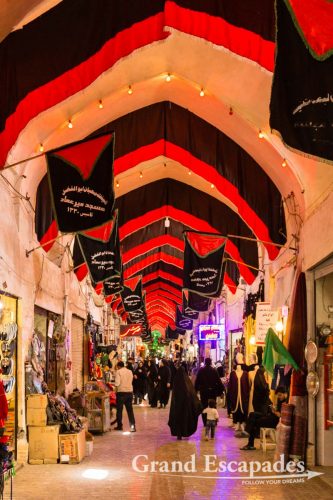 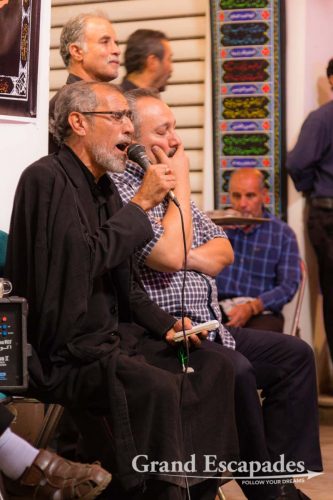 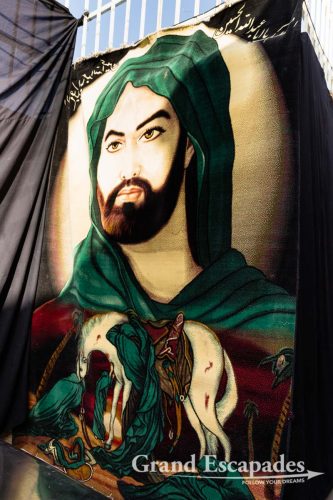 There is obviously a strong desire from the Iranian government and the religious authorities to explain the Ashura to visitors, its role in Shia Islam and the message both of peace and of resistance that it carries. There is also a strong emphasis on the role of mourning and crying, the latter being cathartic.

At many places of interests, young clerics will welcome visitors and offer to explain them the Ashura and the message of peace and love that Islam supposedly carries. Those young men are extremely friendly, extremely well educated, speak perfect English, and brilliantly master the art of rhetoric. One of the key messages that was repeated over and over again was: “Iranians and Muslims are not Daech, we are not like them, we only want peace”. Let’s hope that’s what the regime truly wants…

I enjoyed exchanging with several of them, at times challenging their vision of the world and of Islam – I couldn’t help but asking why they would write so big “Down with USA, down with Al Saude, down with Israel” if the Ashura was a message of peace… But since there was always a small crowd around those clerics talking to foreigners, I avoided any controversial subjects and any critics… You never know who actually listens to you!

Being in Esfahan on the 8th and especially the 9th day of Muharram, I was quite limited since everything was closed… That gave me the opportunity to stroll the streets looking for Ashura parades. Well, I didn’t have to go far, since one of the main processions started from… Si-o-Se Pol, the acionic bridge on the Zayandeh River! 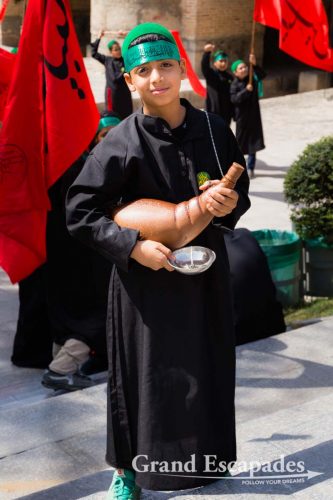 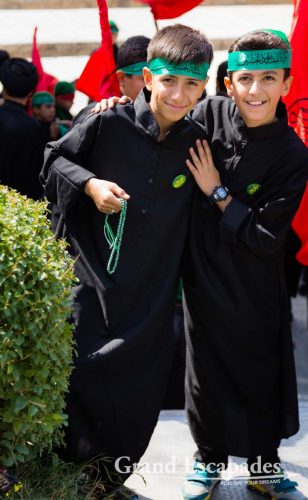 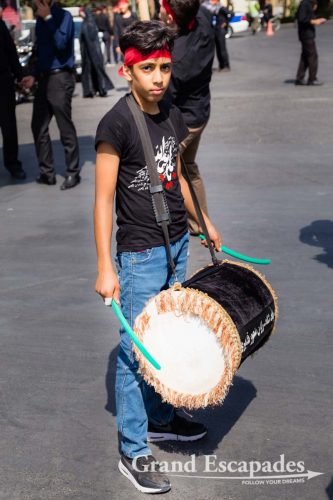 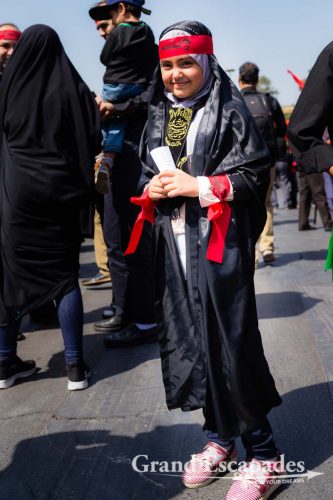 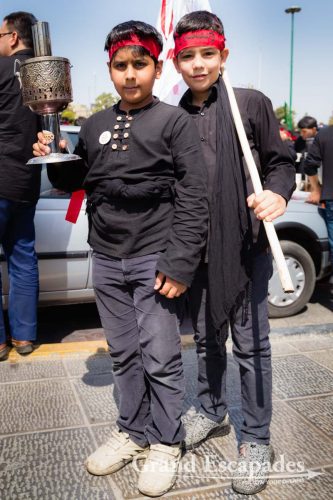 There again, I was surprised how welcome visitors are, as I could take as many pictures as I wanted (even clerics accepted to pose for the picture), and was once again invited for tea and sweets. I was of course asked quite a few times to join for the picture… 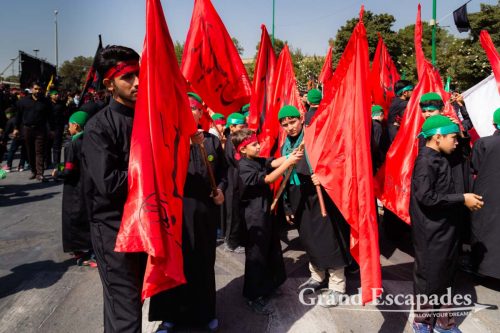 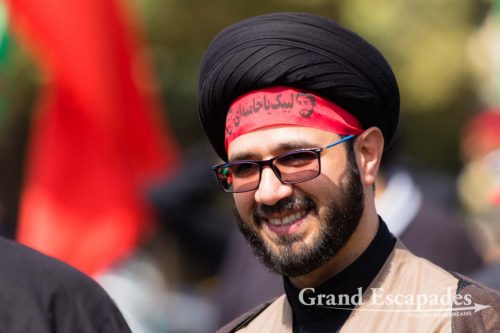 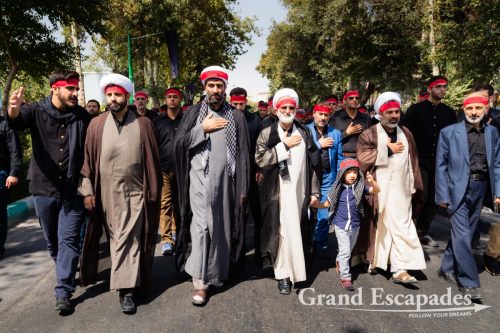 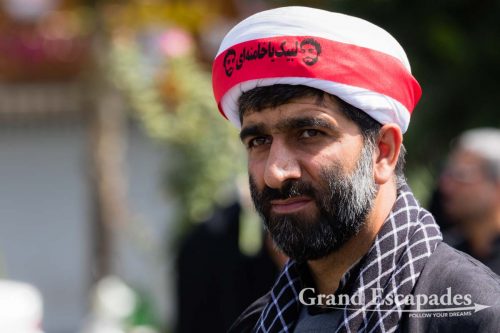 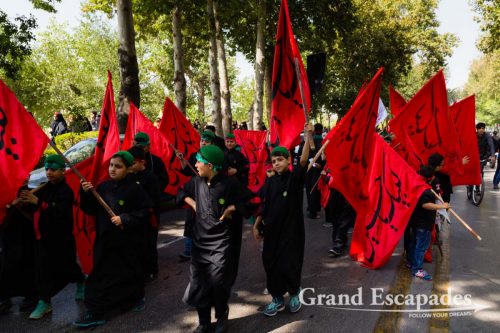 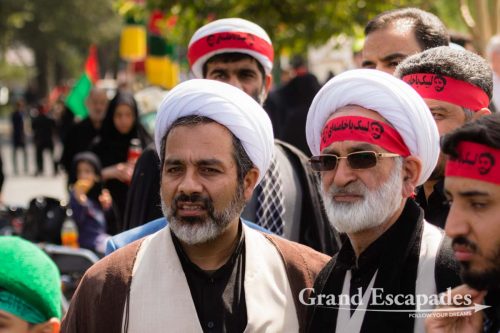 Ashura Ceremony in Ashkezar near Yazd

I arrived in Yazd on the 10th of Muharram, in the morning of the very day of the Ashura (I had to charter a taxi from Esfahan to Yazd, as not a single public transport would run for nearly 3 days). And even though that wasn’t planed, it was a great choice! The Ashura Ceremony in Ashkezar, near Yazd, is one of the biggest in Iran, and the one chosen by all TV channels for broadcasting.

There again in Yazd, everything was perfectly organized: a free tour was offered for every foreign visitor, including bus transfer (one hour each way), English speaking guides, lunch, and a good place to enjoy the Ashura Ceremony. Well, I was not exactly the only tourist: 3 buses were filled and our guide told us in the end that we were 150 foreigners. After the ceremony, we were even greeted by the Member of Parliament of Yazd, who gave us a small speech of welcome to Iran and of explanation of the message of the Ashura, laying stress on the fact that Iranians / Muslims are not Daech, are not terrorists, and only want peace! Not the first time I heard this one… 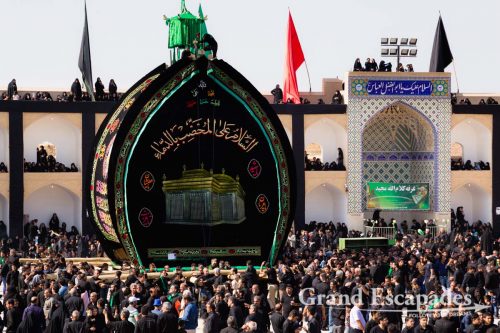 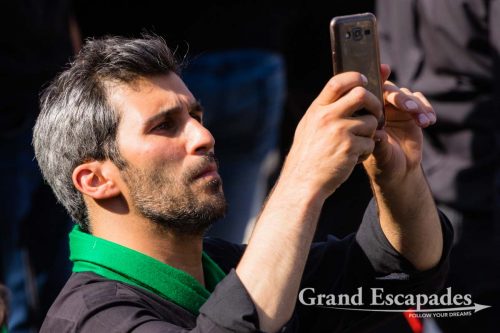 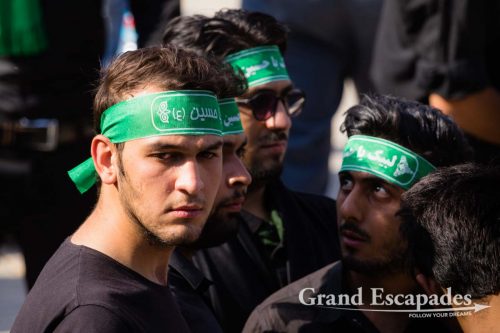 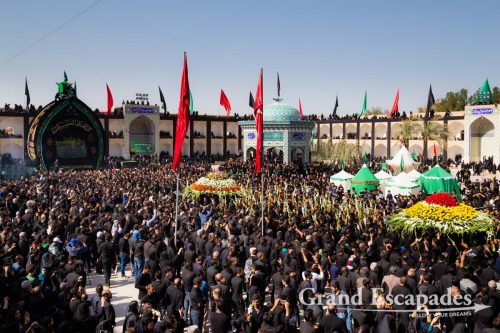 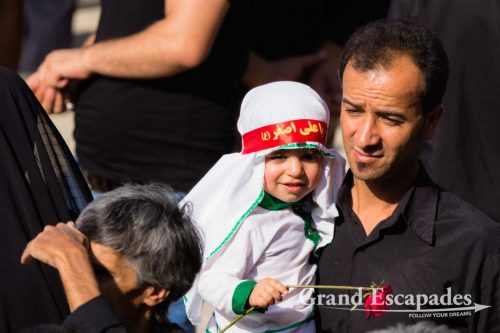 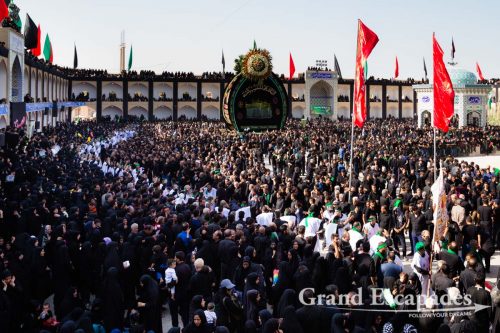 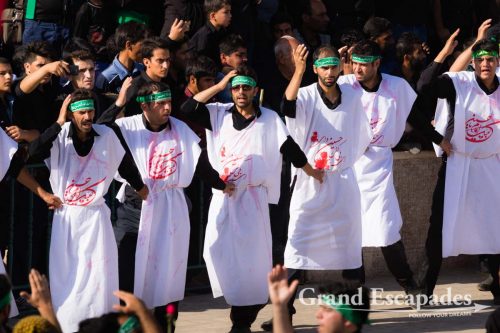 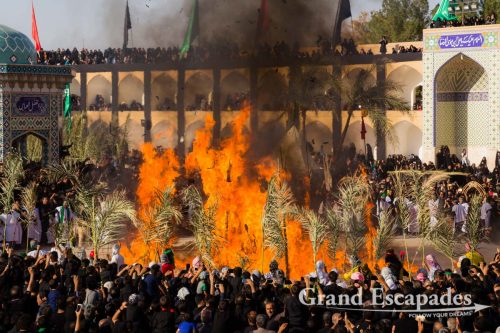 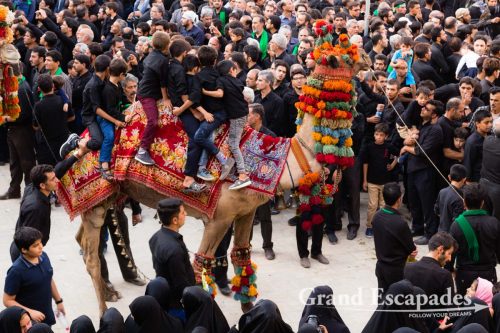 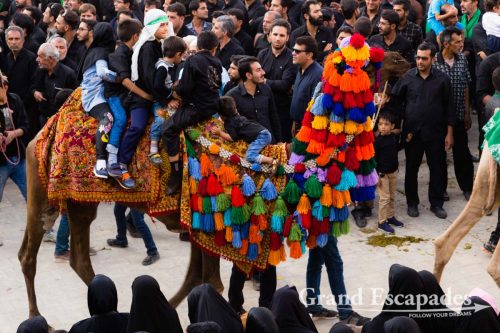 The ceremony itself is quite a show:

2 Responses to Experiencing the Ashura in Iran