Yazd also has turned – deservedly – into a major touristic hub in Iran, and this is not without consequences. Around major attractions, taxis and touts approach visitors offering numerous tours and activities in and around town. But the good news is: once you venture a few streets away, you will be the only foreigner!

There is a lot to do and see in and around Yazd, and you should plan enough time if you want to scratch bellow the surface. Also plan enough time to just wander through the endless, labyrinthine string of alleys of the Old City.

Old Yazd is a maze of mud brick houses all interconnected by passages that once used to be the alleys of an extended bazaar. Nowadays most shops are deserted and motorbikes noisily ride through the passages avoiding the traffic outside.

Yazd can be extremely hot in the summer months, but ancient architects had a solution ready: “Badgirs”, or “Wind Towers” on the roofs. These little towers on top of a building have slits on all four sides to catch the wind, take it down into the house, while the hot air is sucked out through the same system. At affluent households the incoming air was further cooled by a small pool of water, also moisturizing the bone-dry air. This ancient air conditioning not only cooled houses, but large water cisterns and public places. Few of them are still working today.

Equally important to beat the heat: traditional houses were built ten steps below street level. This is how I entered all old buildings in Yazd, arriving in a large sunken courtyard full of small trees, flowers and a small rectangular pool. The family lived in rooms all facing the picturesque courtyard. Traditional guesthouses have a similar setup and there, you can enjoy hanging out on the carpet covered wooden beds.

This Garden, now a UNESCO World Heritage Site, was built in 1750 on the traditional Persian principle of symmetrical design, and is planted with soaring evergreens and dotted with sour orange and pomegranates. What is so special there is the highest “Bagdir” or “Wind Tower” in Iran, at 33 meters. Inside the pavilion, visitors can study the mechanism of the Wind Tower. 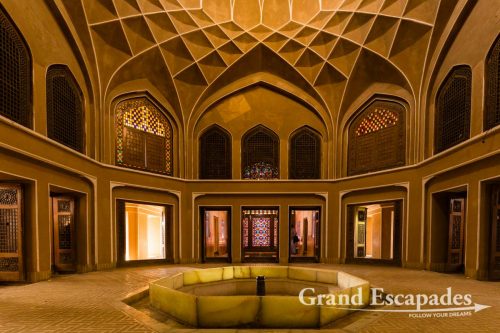 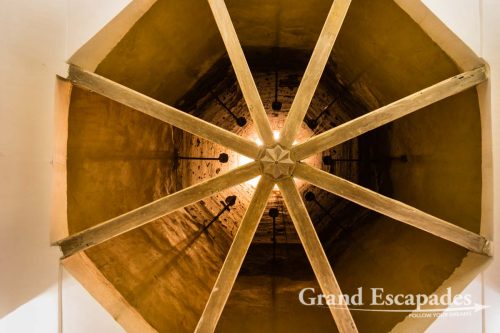 Every Iranian city seems to have its Jameh Mosque. What makes this one so iconic are the highest minarets of Iran: at 48 meters, they are visible throughout the old town! The façade of intricate blue Islamic patterned tiles, is especially breathtaking when lit at night. 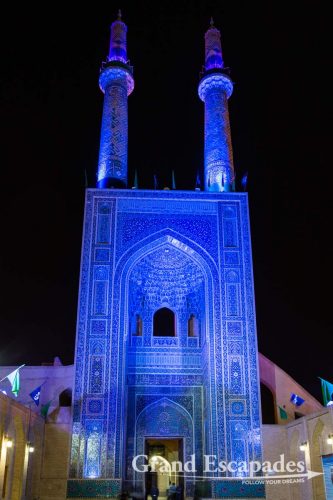 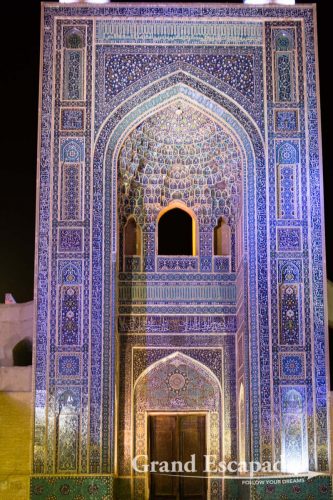 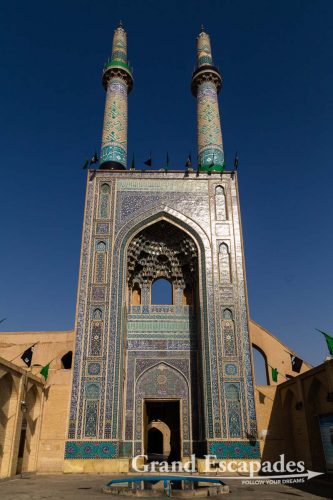 This Hosseinieh (building used in the commemorative ceremonies for Imam Hossein’s death), built in the 15th Century, is one of the largest in Iran. The façade is especially beautiful at night, when the numerous, beautifully symmetrical Iwans, are lit with orange lights.

This small, underground museum shows how “Qanats”, a system of underground canals, brought water in the city from aquifers located up to sixty kilometers away. Such an impressive engineering system was built two thousand years ago!

Yazd was and is a stronghold of Zoroastrianism – Iran’s pre-Islamic religion – and the world’s first monotheistic religion. Nowadays, many important sites can be visited in and around the city.

Have you ever seen a fire that has been burning for 4.000 years? If not, go and visit the Zoroastrian Fire Temple in Yazd. This eternal flame is said to have survived all this time and even the transfer from different temples. Flickering brightly behind a glass barrier – so it would not be polluted by human breath – it is the only attraction inside the simple building. 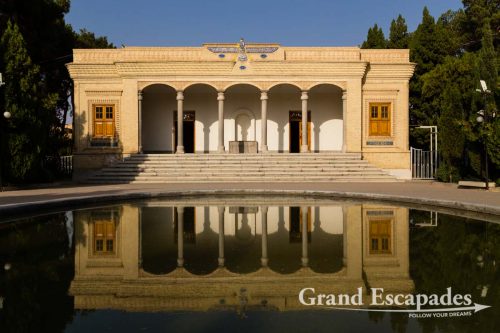 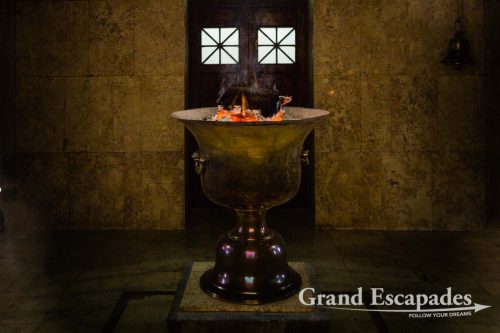 On two barren hilltops outside the city sit two Towers of Silence. Each tower consists a flat uncovered platform surrounded by a high wall. In this large circular place corpses were left for the vultures to pick the bones clean, in accordance with Zoroastrian belief about the purity of the earth. It was only in the 1960s that this kind of ceremony was stopped. 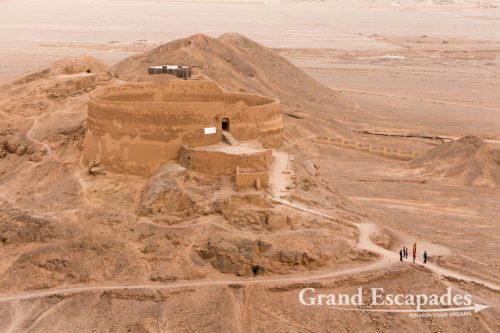 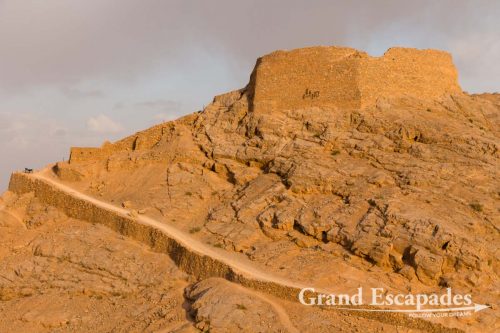 This is Iran’s most famous Zoroastrian pilgrimage far out in the desert. A steep climb up hill is where I found a temple, home of the “drip”. And that is the story of the drip: a princess fleeing and thirsty threw her staff against the rock and water has been dripping from it since then. This is pretty much it, again a few scripts, and an impressive brass door showing Zoroaster.

The view across the desert is stunning, though. I arrived early in the morning to escape the heat. Our little car was able to drive all the way up the entry point, so we only had to climb the many, many stair up to the very temple. When I watched the tour busses unload way down in the valley and its Italian passengers puffing up the dusty hill at 11:00 am, I felt truly sorry for them.

This is a heavily advertised tour in Yazd nowadays, and every travel agency and every taxi will try to sell you this day trip… I went there back in April 2014. 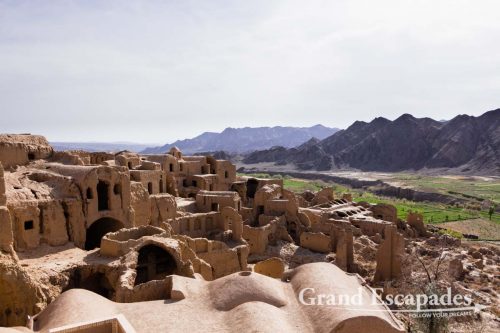 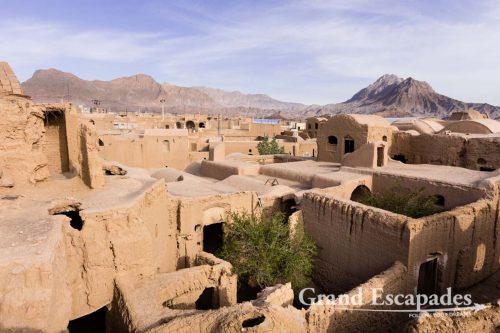 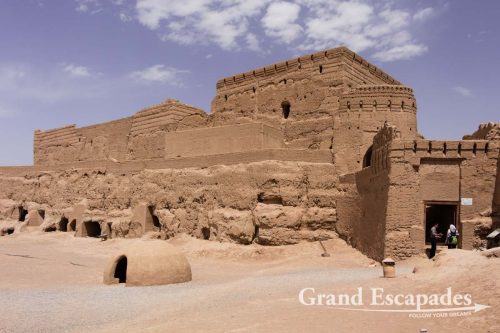 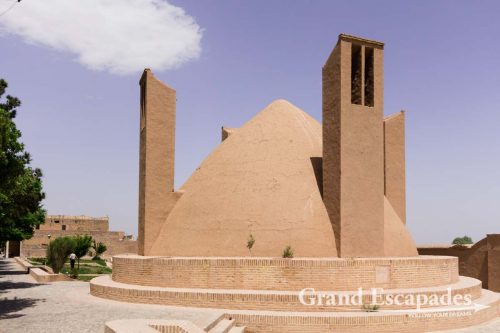 Water cooler with Windtowers in Meybod

Caravanserais On The Silk Road

Zein – O – Din Caravanserai is also a very popular day / night trip from Yazd. I went there back in April 2014. 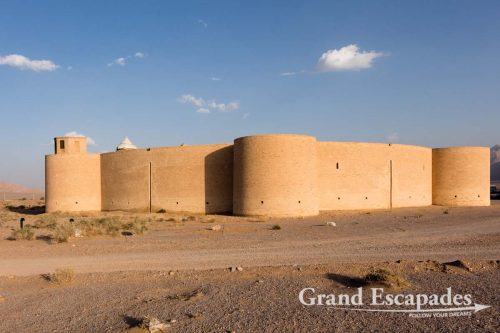 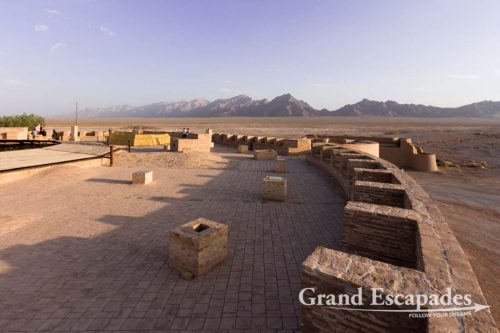 A Gateway To The Desert?

I haven’t been to the desert in Iran, and from what I understand, the Kaluts Desert, not far from Kerman, offer better and less touristy experiences, If you do not have sufficient time to go further south but still want to experience Iranian’s deserts, Yazd seems to offer quite a few possibilities… Beware that temperatures too early or too late in the season can be oppressive. 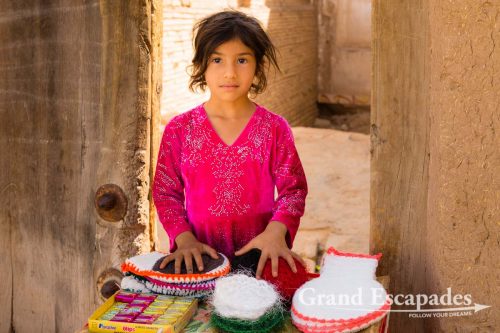 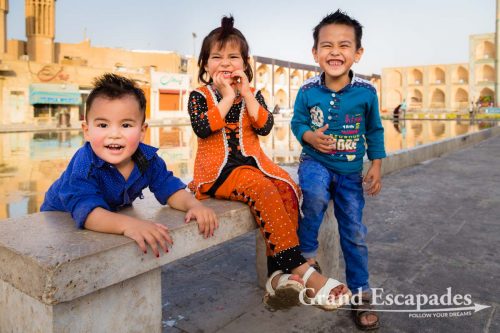 Esfahan – The Touristic Town Of Iran
Experiencing the Ashura in Iran