Though slightly more popular than it was 7 years ago, the South of Colombia still remains Off The Beaten Track, with mostly Colombian visitors. This is of course easy to understand considering the difficulty to reach this part of Colombia in the first place, though things have improved recently.

You can now fly directly from Bogota to Popayan (3 flights a day with Avianca) or take a very comfortable Doble Piso bus from Coomotor (try to secure one of those large seats downstairs) to or from Bogota or Medellin and on the way stop in Neiva and experience the Desierto de Tatacoa – Avoid weekends in the desert, though, as this place has now turned very popular amongst young Colombians who enjoy going there for long parties and try to be at a time with no moon to enjoy the stars & the Milky Way…

So it is perfectly understandable that visitors with only 3 or 4 weeks at hand will think twice before wandering through this part of the country… Nonetheless, if you have enough time available, or are not bothered with challenging travel conditions, do not overlook this area, which in my opinion offers some of the highlights of Colombia, and the possibility to travel Off The Beaten Track…

I ran out of time in 2016 and unfortunately couldn’t return to Tierradentro, which I truly regret… Read about our experience there back in 2009 and in the surrounding villages.

Little to nothing is known about the civilization that chiseled these mysterious sculptures from volcanic rocks about 2.000 years ago, making it one the oldest cultures in the Americas.

Unfortunately, as so many ancient civilizations in the Americas, it had no writing and had disappeared before the Spanish arrived. So scientists provide this or that hypothesis to explain the statues large and small. Nevertheless, the true meaning of them might very well remain a mystery forever.

First excavations began in 1913 and 1914, and several sites have only been discovered as recently as 1993. Local farmers were the first to discover the stone slabs, but they were only interested in the offerings inside the tombs next to the sculpture…

Yes, Popayan’s historic center truly deserves to be called “La Ciudad Blanca” or “The With City”! Literally every building is plain white, beautifully restored with elegant iron grills in front of the windows and massive wooden doors also decorated with iron works. Most of the historic buildings house busy government offices, banks or insurance companies. The city is also famous for its many colonial churches, and there surely is a demand – they are packed with worshippers in the evening, even on weekdays.

We arrived there on a Sunday, the eve of August 15th, and discovered an empty city, with everything closed… Locals promptly warned us that on the 15th, it would be even worse… Quite depressing, though offering great photo opportunities! On Tuesday, normality settled back, and the center was again milling with people lining up for whatever service they have come for, and congested with heavy, noisy, smelly traffic. 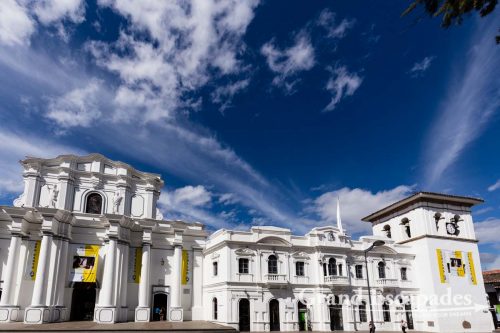 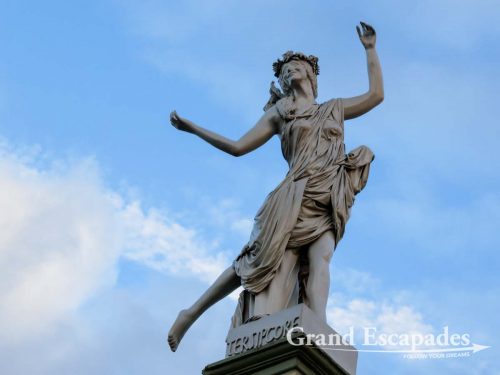 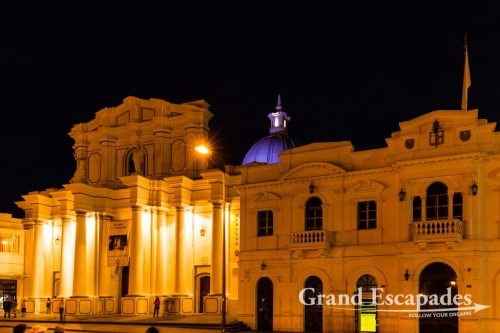 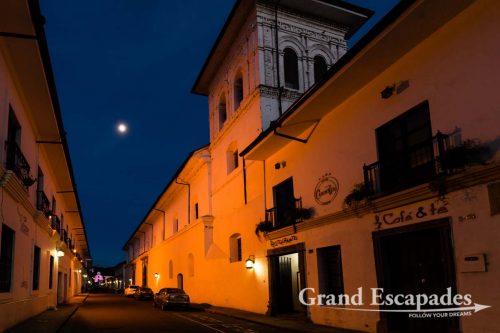 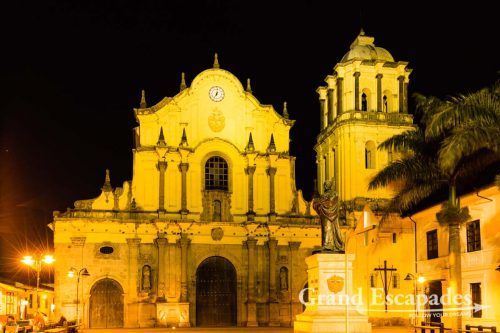 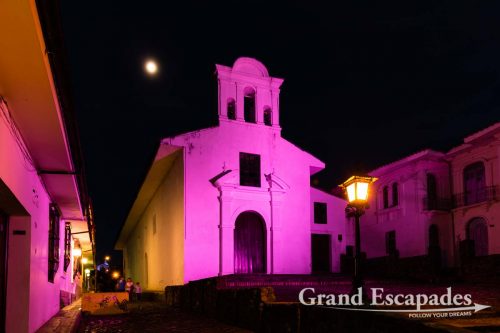 Silvia, a village situated at 2.650 meters, about an hour drive from Popayan, is the center of the Guambiano region, one of Columbia’s most traditional indigenous groups. The Guambiano still use their language and dress in colorful clothes, especially for market day. Then the men wear blue skirts, wrapped around their waste, thin hand-woven ponchos and a bowler hat. The women sport voluminous black skirts, large blue shawls around their shoulder held together by safety pins.

They live in the surrounding villages and arrive in throngs for the Tuesday market in Silvia to sell their agricultural products, turning this picturesque village in a sea of blue. But considering the large groups of Guambianos who just hang out at the plaza, it also seems a social event to meet up with friends. When they leave Silvia early afternoon, sacks full of newly purchased goods pile up high on the roof of their colorful Chiva busses.

Though much more popular than it was 7 years ago, Silvia’s Guambiano Indigenous Market remains very genuine and little touristy. How long this will last, is hard to say… 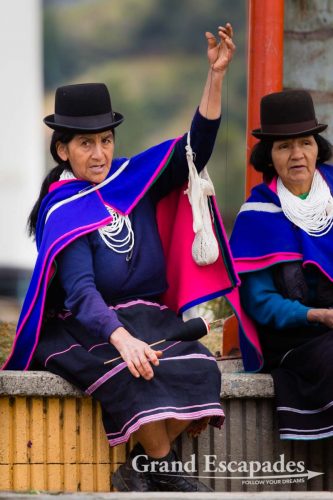 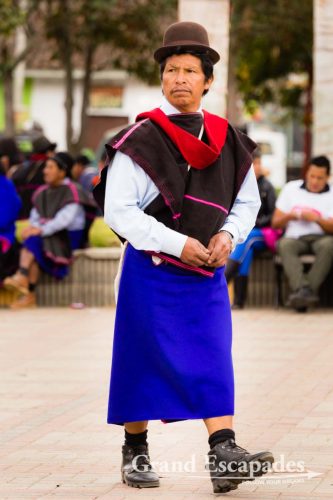 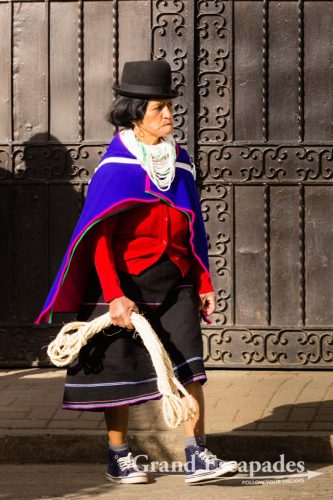 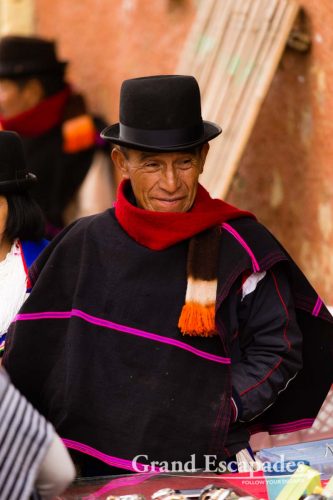 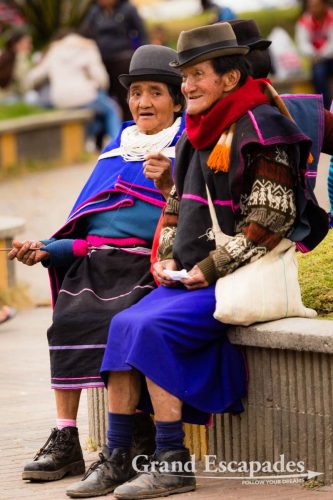 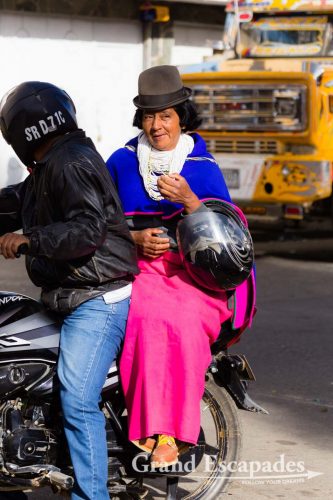 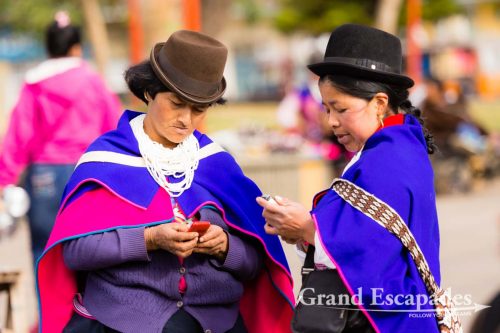 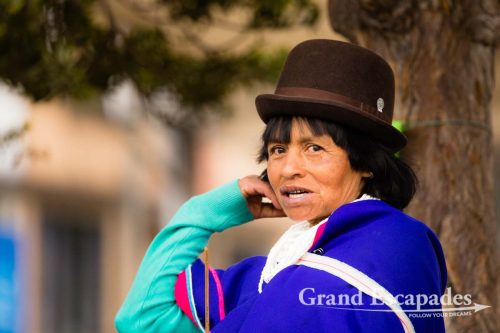 Salento – The Touristic Heart Of The Zona Cafetera
Medellin – How To Enjoy the Desfile de Silleteros?