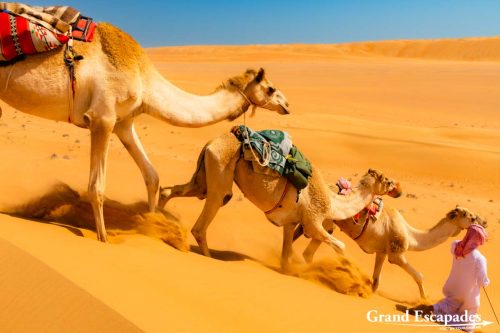 A day on a camel through the Wahiba Sands

Oman is an upscale and expensive destination, with a significant “but”: although the government is looking for “high value visitors”, i.e. tourists ready to dish out significant amounts of money, they also allow almost unlimitedly wild camping…

So choose your pick! Either you want something rather “classical” – expect a mid-range to high-end type of budget. Or you just go wild camping, and you can surely travel in Oman for a very reasonable budget. Note that this second option can be challenging both for Musandam and for the Wahiba Sands.

Itinerary & Time Of The Visit

I visited Oman twice, and basically both trips were quite similar in terms of organization and budget:

We spent exactly the same amount during both trips, though they were quite different. But that gives you an idea of what a mid-range type of travel budget looks like in Oman

Hotels are extremely expensive: a guesthouse will charge on average 80 to 100 € and the people we met who ventured in cheaper options had a challenging time. If you want to splurge, you won’t have any problem doing so! There is an amazing network of 5-stars hotels around the country… Expect to spend 200+ € per night though, and even much much more on the top-end resorts (700+ € a night).

Note that prices were lower in 2022, but with so few tourists due to the Covid-19 pandemic, it was easy to secure “really cheap deals”!

Food is good and extremely cheap in comparison to accommodation. It can get a bit monotonous outside of Muscat though, when it is Indian or Indian. We spent 15 € per person per day on food on each trip and had a few nice experiences.

We have no detailed information on this, since we certainly did not party. Drinks are included in our Restaurants & Food Budget. Alcohol is available at the bars of international hotel, and there you will actually find more Omanis in a party mood than Western visitors.

First, there is no network of public transport, so you have to rent a car. Car rentals are cheap and gasoline prices far cheaper than in Europe, nevertheless this remains a significant part of the budget. We spent 25 € per person per day on both trips.

This we asked ourselves quite a bit before we started off. Roads are excellent, so a sedan car will do for reaching most places, except crossing the Mountains (Jebel Shams and Jebel Al Akhdar, where 4WD is absolutely mandatory). Even Wahiba Sands is doable in a sedan, since most of the agencies will pick you up for a small fee.

Activities such as dune bashing are costly. We spent 460 € altogether per person in 2 weeks, including twice scuba diving

Oman is definitely not a place to splurge, if budget is of any importance for you. If not, then you will find some of the best hotels in the world!

Go wild camping! We did not consider this option, though…