La Guajira’s reputation as a place beyond civilization is easily understood when looking at its past and modern history – A place where centuries ago pirates attacked Spanish ships loaded with precious cargo and strong-willed Wayuu never surrendered. Modern days see different kind of adventurers: large scale smuggling is so widespread, extensive and above all, so obvious that it is almost beyond belief…

The desert-like peninsula on Colombia’s northernmost point is still the home the Wayuu “Indigenos” who have inhabited this extremely hot and barren land for centuries, resisted all intruders and on their part raided towns like Riohacha as late as the 1930s. Things have calmed, but the area still exhibits an aura of lawlessness that – as least for me – seems unparalleled. 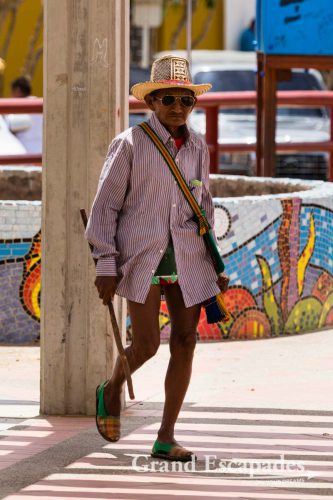 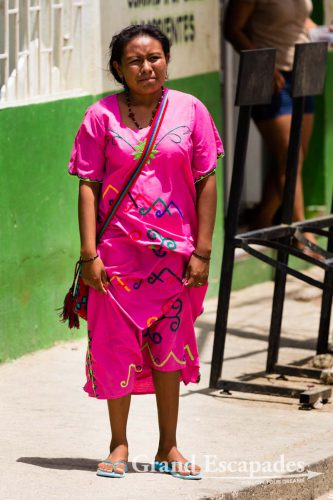 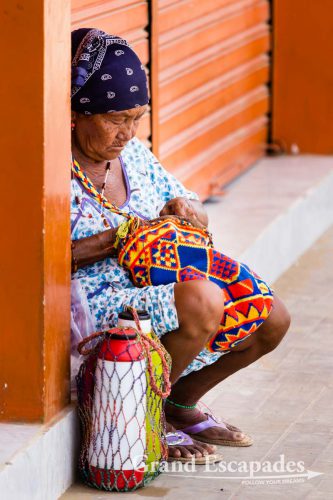 The small town of Uribia, only an hour’s drive from the border town of Maicao at the border to Venezuela, is teeming with smuggled goods. Gasoline is the prime merchandise, easily available at every street corner for a few cents a liter, cheap, but still much more expensive than what it costs in Venezuela.

Who has not been to one of the many “Ends of the World”? Ushuaia for instance claims that title as many other places, but here on the tip of La Guajira, at the northernmost point of South America, it feels absolutely real.

Reaching Punta Gallinas is no easy undertaking: for six hours my Land Cruiser swayed and jolted through the rough terrain, following this or that track. The landscape is wild, nothing but cactuses and green low-growing trees, called “Trupio”, the only vegetation that seems to survive in this hot, very dry land. Every now and then a single hut can be seen, the home of a Wayuu family, who persistently cling to the land of their ancestors. Skinny goats roam the land and funnily, I also spotted a few wooly sheep in this heat.

So why go there? Read on!

The main reason to go to La Guajira is that you find there some of the most remote, most spectacular and least visited beaches in Colombia, and actually in South America!

Taroa Beach is probably the most breathtaking of all beaches in La Guajira’s deserted, scorching hot wilderness! High-towering dunes roll into long stretches of golden sandy beaches. Naturally I tumbled, ran and slid down the dunes. Climbing up was less fun though. Unfortunately, it is now much more popular than it was back in 2009…Back then, we were completely alone! It was just us, and nobody anywhere around. In 2016, we had to share the beach with another 6 or 7 Jeeps, approx. 35 people! The other downside? There is only so much time you can spend on the beach without any vegetation whatsoever to provide shade from the scorching Caribbean sun.

Furthermore, Bahia Hondita is an incredibly beautiful beach, golden sand bordered by emerald green water and surrounded by cliffs. The water is actually too shallow to go for a swim, but this is a good place for postcard-like pictures… And no worries, you will be taken to many different beaches during the tour where you can enjoy swimming in the warm Caribbean waters…

Of course, you will also discover the Faro de Punta Gallinas, South America’s northernmost point. So much for the “Been There, Done That Crowd”…

And you will go on a boat late afternoon on the Laguna de Bahia Hondita to see a small colony of resident Flamingos.

Last but not least, I had there the opportunity to witness two of the most spectacular sunsets I have ever experienced… I never thought Africans Read Skies could be topped, but I was obviously wrong! 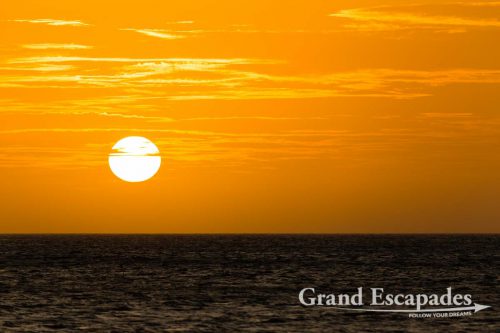 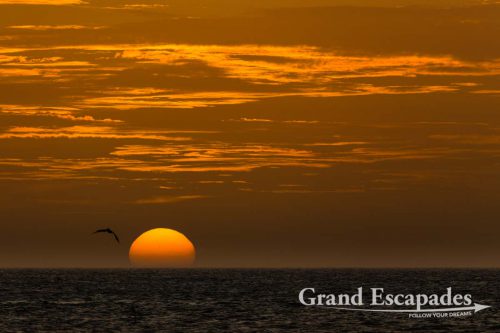 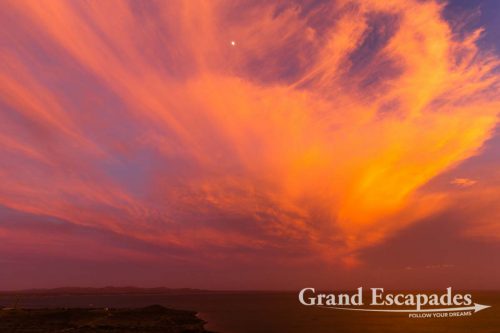 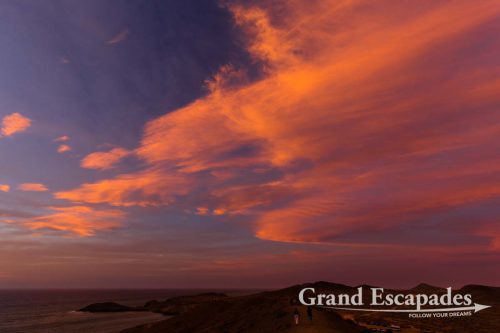 Cabo De La Vela – A Place To Chill Out

Cabo de la Vela was once a fishing village in the middle of the desert, but has now turned into a very popular destination for travelers to chill out or to learn to Kite Surf. It is best described as two long parallel rows of wooden huts running along the ocean. Lots of very basic cabanas for rent, restaurants, and even Internet has found its way here.

We spent the first night there, visiting several beaches that are not so exciting compared to those in Punta Gallinas, but are pleasant nonetheless…

Insist that the car leaves Riohacha early, so that you can visit the salt fields of Manaure, the biggest “Salinas” on the peninsula, on the way to Punta Gallinas, and not on the way back: If you arrive there too late, it is dead quiet, as this place is simply too hot during the day and workers leave before noon.

There, the salt is collected in artificially made pans. In the nearby plant it is cleaned from sand and then piled up in a huge pure white mountain, a majestic sight. It is finally scooped into bags of approx. 50 to 60 kilograms and then heaved onto trucks. In 2009, in scorching heat, we witnessed a team of young men doing this back-breaking job.

El Cerrejon, in the southern Guajira, one the biggest open-pit coal mines in the world, produces 30 million tons a year, half of the total output of Colombia, the fifth biggest coal producer in the world. Three international companies own the place and had a railway line built all the way to Puerto Bolivar, where the coal is loaded onto ships. The railway runs basically parallel to the gravel road from Uribia to the turn off to Cabo de la Vela. Trains pass frequently and once we counted the incredible number of 130 cars.

Reaching the more remote and most interesting parts of La Guajira around Punta Gallinas requires not only an excellent 4WD but also a guide, as this is only Off Road through Colombia’s largest desert… So yes, there is no way around taking a tour! In 2009, the first time I went to La Guajira, departures were random, depending on how many people would want to go. And very few people actually traveled there! 7 years later, there are several agencies departing daily. Yes, La Guajira is no longer a well-kept secret, and you now find real camps near Punta Gallinas, each able to cater for dozens of people at a time!

Costs have gone down with increasing number of people, but beware that agencies now squeeze 6 people (plus driver) in each Jeep, with almost no room for luggage (well, yes, on your knees). So no, this is no comfortable drive! Expect to pay 550.000 COP (170 €) for a 4 days / 3 nights tour. If you go by public transport to Cabo de la Vela and book a tour from there (you will not be in a Jeep though, but stand in the back of a small truck), expect to pay all in all 250.000 to 300.00 COP (80 to 95 €) for a 3 days expedition. But you will spend a lot of time organizing things, and departures from Cabo de la Vela are… Random! I would there recommend paying the 15.000 COP extra per person per night (4,7 €) to have a bungalow (with private bathroom). Those are very basic, but beds are much more comfortable than hammocks, and you don’t have to worry about your belongings.

Another change struck me quickly… Wayuu children have now set up “check points” on the main roads through the desert and stop the car begging for candies. More often than not, they now refuse to take down the rope, which blocks the way when you haven’t paid your “toll”. I was not aware of that (and would have strictly refused to play along) but my fellow travelers had obviously read carefully what the agency recommended and distributed candies to children that were only a few years old.

Well, let me put this straight: this is in my opinion not only extremely damaging for the health of those kids, but the example given is the worst western tourists can do! Those kids do only partly go to school, and get used to depending on the goodwill of tourists. Why major and established agencies like Expotur (which I chose) play along, I cannot understand! I would there clearly recommend REFUSING this business. It is the role of the driver / guide to tackle this issue and refuse distributing candies…