The wind was so strong on the Magellan Strait that day that the ferry could not dock. We had thus to wait for almost three hours for the wind to get down – Beagel Channel, Tierra del Fuego, Argentina

After 16 days in Chile we are back in Argentina, in Ushuaia, the southernmost city in the world, as it likes to pride itself. Obviously it has marketed itself much better than Puerto Williams, in Chile, on the other side of the Beagle Channel. This is the TRUE southernmost settlement in the world, but not more than a couple of houses. Being almost at the 55th parallel south, it is further south than any other city on any other continent.So Ushuaia mercilessly sells its unique location claiming the title: “El ciudad en el fin del mundo”, attracting more and more tourists every year. So we considered it as the best place to meet Gilles’ family for Christmas! END_OF_DOCUMENT_TOKEN_TO_BE_REPLACED

Argentina is the fifth country we are visiting in South America. As already mentioned in previous reports, even though these countries are on the same continent, they are worlds apart! But after 7 weeks in Bolivia, arriving in Argentina was a shock to us in many respects. END_OF_DOCUMENT_TOKEN_TO_BE_REPLACED

The best about Gaiman and Dolavon: the Welch afternoon tea!

These two places found their way into a traveler’s itinerary because of their incredible history. In 1885, a group of Welsh settlers, frustrated by English domination, arrived near Golfo Nuevo, today Puerto Pirámides. Looking for a place to retain their language and cultural identity, they asked the Argentine government for land and eventually were allotted the lower valley of Rio Chubut. These “Gales” had learned about this area through the reports of Captain Robert Fitz Roy, who had explored the region in 1833. END_OF_DOCUMENT_TOKEN_TO_BE_REPLACED

The Biggest Penguin Colony Outside Of Antarctica 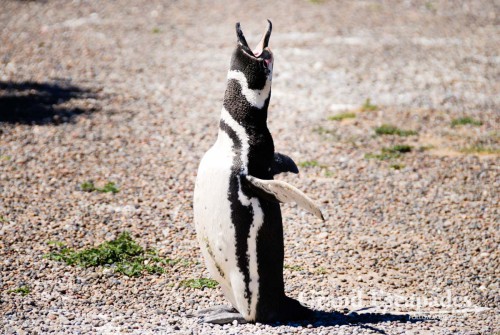 About 120 km south of Trelew is the other main attraction of this region: the biggest penguin colony outside of Antarctica. An estimated 175.000 couples (some say 200.000 couples) of Magellanic Penguins arrive here in August / September to build nests and lay eggs. END_OF_DOCUMENT_TOKEN_TO_BE_REPLACED

A male sea elephant can weight up to 4 tons and has a harem of up to 200 females, Peninsula Valdez, Argentina

On the second day, starting from Puerto Piramides, we drove around and across Peninsula Valdéz, a very long drive of about 220 kilometers on gravel roads. There are mainly three places to go. END_OF_DOCUMENT_TOKEN_TO_BE_REPLACED

At the airport in Trelew, we rented a car and went straight north to Puerto Madryn, the small town at the entrance of the Peninsula, a 65 kilometers ride on a perfectly straight road crossing northern Patagonia. Here we got a first taste of what the landscape in this area of Patagonia is like: flat like a pancake with low growing bushes, extremely monotonous no matter which direction you go. Well, nobody comes here for the flora but for the whales, guanacos, sea lions, sea elephants, penguins and lots of other wildlife! END_OF_DOCUMENT_TOKEN_TO_BE_REPLACED

Crossing the Border from Bolivia to Argentina…

What a trip! Going from Potosí / Bolivia to our next destination, Trelew (pronounce it “Tre-le-o”) in northern Patagonia, was a long journey of almost 4.000 kilometer. It took us no less than 5 days! END_OF_DOCUMENT_TOKEN_TO_BE_REPLACED