Visiting Rwanda also means facing its tragic past, one of the darkest episodes in Human History. It is a haunting experience… The country is literally doted with Memorials. I had planed to only visit 2 of them. More I could not stomach!

Between April and July 1994, within 100 days, approximately 1.000.000 Tutsis and moderate Hutus were killed, while the world stood by and watched – hacked to death with machetes or other farm tools, strangled, drowned in septic tanks, palled, shot, buried alive, burned alive or killed by methods beyond imagination. More often than not, women were raped, sometimes in front of their families, and then gruesomely murdered.

This genocide was carefully planed months, if not years in advance… The Hutu militia was openly and actively supported by the Rwandan Army. The few UN soldiers there were forced to watch and the international community was busy defining if the mass killings were “acts of genocide” or indeed “genocide”.

Those three months of killing and murder were actually only the ultimate climax in a long lasting conflict that roots in colonial times. Under German rule, people owning more than 10 pieces of cattle were declared Tutsis, people owning less Hutus. Under Belgium rule, this distinction was turned into an ethnic difference and aggressively propagated. Physical features were assigned – a complete nonsense in a tiny country where intermarriage was common. Identity cards were issued that stated whether a person was a Hutu or a Tutsi and in school the groups would sit separately.

Tutsis were actually massacred long before 1994: in the late 1950s, in the early 1960s and in the 1970s. Each time, many fled, weakening the Tutsi minority even more. In the neighboring countries – Burundi, the Democratic Republic of Congo, Uganda and Tanzania – they formed the Rwandese Patriotic Front (RPN). This militia eventually freed the country in July 1994, after the UNO had pulled out and the international community refused to help.

Of the many genocide memorials in Rwanda, the Memorial Center in Kigali is the largest and the most visited one. Initiated by two young British men, it was opened in 2004, the 10th anniversary of the genocide.

The concept of the museum follows the events in a chronological order: the build up of genocide, the genocide, and after the genocide. The entire visit is tough to stomach, but the children’s rooms are simply unbearable: photos and short biographies of the young victims, some a few months old, fill the room. 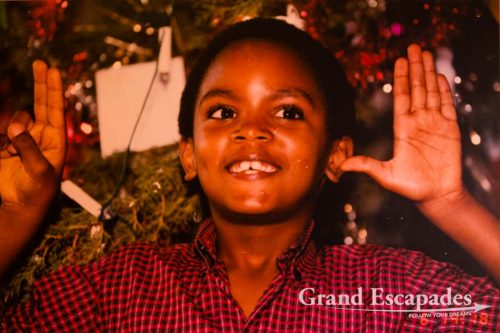 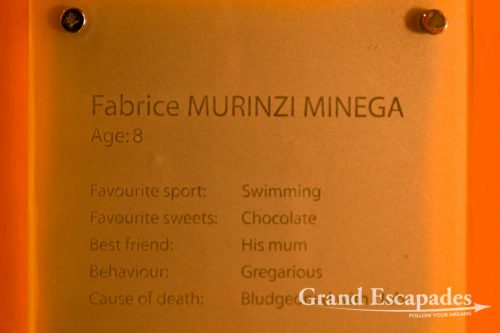 The museum is free, and the expensive audio guide (15 USD) not really necessary, as many explanations are given throughout the museum in Rwandan, English & French. Taking pictures is forbidden, unless you dish out 20 USD… I am not sure I would do it again!

The iron door was forced open by grenades. Then the killing started. The bloodstains can still be seen on the bullet-ridden ceiling. 10.000 Tutsis, who had sought refuge in the Church of Nyamata, hoped to escape the slaughter… In vain!

They actually had good reasons to believe so. As soon as 1959, and as late as 1992, hundreds of Tutsis hid in this church and remained unharmed. Could they possible assume that a fellow Christian would kill them in the House of God? Nowadays, many actually believe that it was planned that way, to have as many people concentrated in one spot as possible, and then kill them easily.

Today, piles and piles of blood-soaked clothes, taken off the corpses, remind of the massacre. On the altar, murder weapons are on display: hoes, knives, ropes, bullets… Children were killed by smashing them against the wall. A particular wall…

Outside are several mass-graves, for the 10.000 Tutsis that were slaughtered in the very church and the 35.000 that were massacred in the surroundings.

There is also the grave of Tonia Lorettin, an Italian lady who had lived in Rwanda for a long time and who had watched the increasing attacks on Tutsis for decades. In 1992, she informed the international press, her death sentence. It is openly said in Rwanda that the Archbishop of Kigali was present in the meeting where her murder was planned.

On those apparently peaceful and beautiful hills surrounding Nyamagabe, one of the most horrific episodes of the Genocide took place: 50.000 Tutsis were sent to the technical school by the authorities, claiming that they would be better able to ensure their safety. First, water and food supply was cut off, to weaken any resistance.

On the night of April 21st, Interahamwe militias and heavily armed soldiers came and massacred men, women and children in a horrid 8 hours. Only a dozen could flee and somehow survived.

After the massacre, authorities used bulldozers to dig mass-graves… Several hundred bodies were found mummified by the heat of decomposition in those graves. Those bodies are now on display in some of the classrooms of this former school, a sight tough on the stomach!

In the hills surrounding Karongi / Kibuye on the shores of Lake Kivu, the Tutsis resisted heroically, if desperately, against their killers, during weeks & weeks: more than 50.000 sought refuge on these misty hills, and could successfully fight back with rudimentary weapons.

On May 13th though, the killers came back in full force, supported by heavily armed soldiers and militias. After two assaults, more than half of the Tutsis had been killed in fierce hand-to-hand fights. The others had no other alternatives than seeking refuge in the hills and hide for their lives. When the French army arrived end of June, only 1.300 had survived the relentless attacks.

Our guide at the Memorial, Matthias, was himself a survivor of the Genocide. He had actually joined the Rwandan Patriotic Front a few months before the killing started and was badly wounded when the R.P.F. troupes freed Kigali. Of a family of 93, only one of his sisters and Matthias survived the Genocide… Impressive was his composure when talking about the murderers leaving freely in every community in Rwanda: “We must forgive, if we want to build a new Rwanda”…

The Hotel des Milles Collines could be just another boring 5-star hotel, but for its unique history: during the genocide, the manager Paul Rusesabagina, a Hutu, sheltered and saved 1.250 Tutsis. These events were recalled in the outstanding movie “Hotel Rwanda”.

Of course I had to drop by when visiting Kigali (I can’t afford staying there) and enjoy a drink at the bar overlooking a pool where the hotel’s clientele, mostly expat African families, enjoy their time there, dishing out several hundred USD a night in a country where this represents 6 to 12 months salary for many…

4 Responses to The Rwandan Genocide