The picturesque town of Bahir Dar is the gateway to 37 ancient monasteries that dot the shores and islands of Lake Tana. It is also the source of the Blue Nile, which fascinated ancient Egyptians and modern day explorers alike. Even 21st Century tourists are still drawn in by the romanticizing tales and exotic flair.

But as most of Ethiopia, and especially touristic places, Bahir Bar has changed tremendously in the last 5 years, and is hardly recognizable…

This once relaxed small town with nice streets lined with palm trees and a pleasant Riviera feeling has changed A LOT between April 2011 & November 2015, and has now turned into a major commercial & touristic hub. The town is now widespread, and luxury hotels and resorts block any access to the shores of the Lake Tana. This was an awful disappointment, as I had very found memories of the palm tree lined street along the lake, so inviting for leisurely strolls in the hours before sunset.

To make matters worse, the government had decided to invite all its supporters for a large scale rally of propaganda and self acclamation (Ethiopia has little to do with democracy), even in a time when approx. 10 million Ethiopians are severely threatened by the terrible drought that hits the Horn of Africa. All hotel reservations in and around town, even those of tour groups, had been cancelled on short notice for the cronies surrounding this crooked regime. And an armada of brand new, ultra powerful, luxury Jeeps (150 to 200k USD a piece, we were told) could be seen around town, and in the parking lots of luxury hotels and luxury restaurants. Appalling, especially in a time of famine, when large parts of the country must rely on international aid!

These 16th and 17th Century monasteries do not look like anything we expect a monastery to look like. First of all, they are circular building. Straw maps shield the walkway that circles the very church. The top of the roof is adorned with a heavy iron cross, often decorated with ostrich eggs. The inside of these monasteries are decorated with the most spectacular colorful wall paintings, telling the story of the bible and many more legends.

The many images of heads being chopped off, people being palled, devils burning disbelievers and so forth give testimony of a national passion – Ethiopians’ obsession with martyrs and their immense suffering for Christianity.

At each church, local guides explain the images. The gory ones, and the ones where the Pharaoh’s Army is being drowned in the Red Sea, they like best… On one of the ancient paintings the eyes of the torturers had been scratched out. Angry children we were told, getting back at the disbelievers. This and many other rituals we were able to observe hint that the Ethiopian Orthodox Church has an influence beyond our comprehension. Priests squat at the entrance of each monastery and collect the 100 Birr / 5 USD entrance fee. 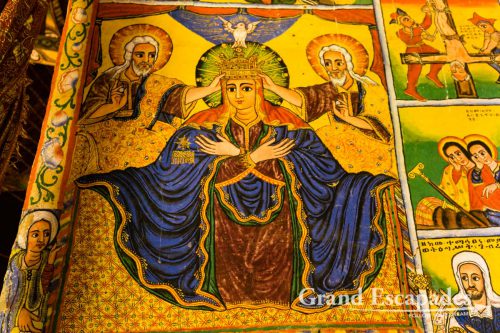 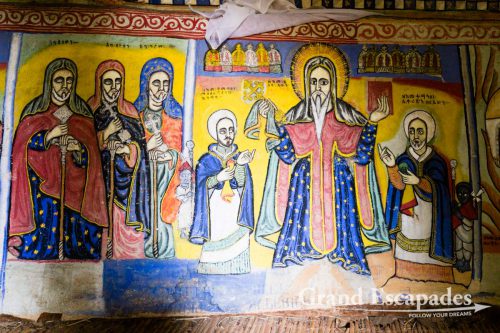 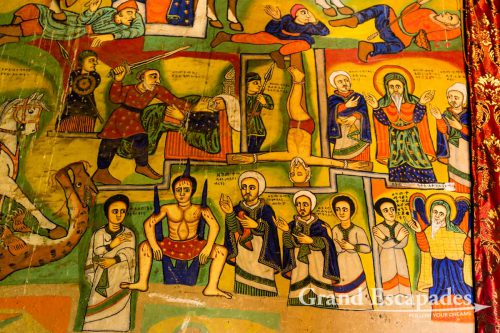 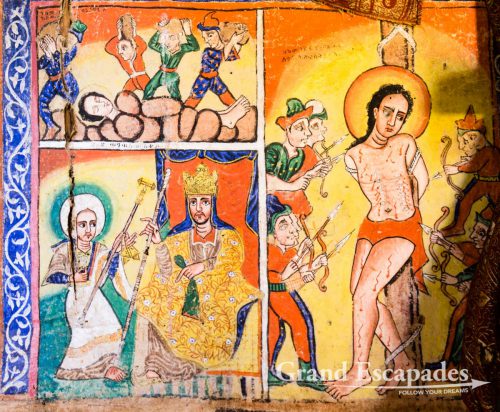 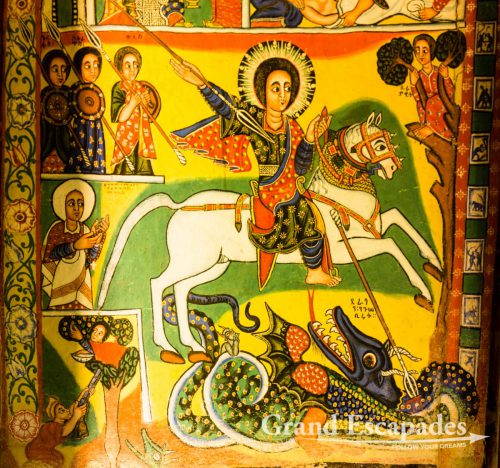 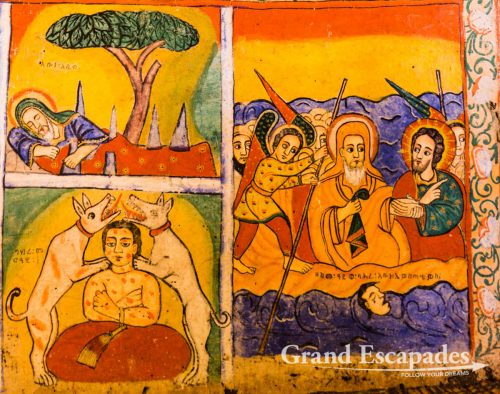 The Blue Nile gently carried our small boat through its outlet from Lake Tana. Indeed a moving experience. We imagined weary explorers worn down by malaria and exhausted by their rough journey, finally reaching the very place people have fantasized about for thousands of years…

To us it was just heavenly beautiful, so very peaceful. Its smooth waters glide past lush green shores and villages hidden behind high papyrus. At its source, nothing hints that the infant river becomes the lifeline for millions of people. An unbelievable 5.500 kilometers further down, it pours into the Mediterranean Sea.

The Source of the Blue Nile at Lake Tana, Bahir Dar, Ethiopia, Africa

In April 2011, we decided against visiting those Water Falls, and preferred strolling the markets of Bahir Dar. In November 2015, we let curiosity take over and went. Honestly? I recommend focusing on the markets… The waterfalls might have been impressive some years back, before an electric power plant was built and the largest part of the stream diverted. But in November 2015, only 2 months after the end of the rainy season, it was almost dried up… How it actually looks like in April, we couldn’t imagine!

Bahir Dar’s market seems unimpressed from the touristic development, and remains as big, as lively and as vibrant as it was 5 years earlier… One of the bigger markets we have experienced in Ethiopia, best visited early morning or in the end of the afternoon. And tourists seem to be still now a rare sight here!

To fully grasp the immensity of Lake Tana and the geography of the Sources of the Blue Nile, the best way is to do it… from above!

Both landing at and starting from Bahir Dar airport gives you stunning sights of the Lake, of the Sources of the Nile and of Bahir Dar.